Quota is the fifth episode of the second season of Two Sentence Horror Stories, which aired on January 26, 2021.

We work ourselves to the bone.
And when we die, they replace us.

Tina and Doyle, two Rush 2 Send warehouse workers, are on a smoke break outside the warehouse, talking about the terrible conditions they work in, with rats all over the warehouse that management won't do a thing about. They go inside, their breaks being sharply limited, and Doyle ends up being bitten by a rat while working the shelves. He shrugs it off and returns to work, not noticing a pile of dead rats not far away.

Meanwhile, Sara, a former worker and now a manager, is being grilled by Daniel, an executive for Rush 2 Send. He's displeased that she isn't as hard on her former coworkers, and notes that company policy changed to only issue bonuses to managers who exceed quota. Sara is taken aback by this, because she was assured that her bonus was guaranteed after 90 days, and budgeted her mortgage costs on that assumption. She jokes that if they locked everyone inside then they would exceed quota, but Daniel actually agrees with this. He writes down a passcode to exit in case of "emergency", but quickly scribbles it out and instead writes a bogus passcode. He gives the paper to Sara and then leaves, locking everyone inside the warehouse.

Doyle, meanwhile, is clearly unwell, rapidly packaging items on pure reflex, becoming sloppy and even dripping a gobbet of snot onto one of the packages before closing it up. Sara then exits the office, talking to Tina, her former coworker. Tina complains about the rats, but Daniel refuses to shut down and lose an entire day of work just to bring in exterminators. Sara asks Tina to back her up so they can meet quota, and Tina agrees for the sake of their friendship.

At this moment, Doyle has simply stopped working, standing listlessly in front of his work. Gus, another worker, asks if he's alright, but Doyle turns and bites Gus, prompting Gus to knock Doyle out cold. Tina and Sara bring Doyle to the office to examine him, and Tina advocates sending him to a hospital, but he soon comes to and attacks again, so they flee and lock him in a side room. Tina demands medical attention at this point, but Sara manages at length to convince her not to, to keep working lest jobs be lost, and instead to discover exactly what happened to Doyle.

Tina goes on the search, eventually finding Gus, now also feral and clearly eating the corpse of one of his coworkers. Meanwhile, Sara returns to the assembly line to find everyone working at a feverish and reckless pace, just like Doyle was. Walking amidst the chaos of the assembly line, she pokes one listless worker Elizabeth, but she turns around and snots all over Sara, attacking her until Sara pushes her off and runs. She runs into Tina, who is also fleeing from Gus, and together they manage to incapacitate him with a fire extinguisher. Although the blows were not lethal, he starts to snot and bleed everywhere, eventually collapsing and apparently dying.

Returning to the office, Sara and Tina find Doyle dead in a nearly identical fashion as Gus. Sara and Tina are left in a panic, and Sara eventually reveals (accidentally) that she gave Daniel the idea to lock everyone inside. Feeling betrayed, Tina leaves. Sara then hears a clang and goes after Tina, only to find a broken canister emitting a flammable, noxious fume into the air. She also notices that all of the infected workers are apparently sleeping, many upright, with Tina sneaking through the crowd. However, Sara suddenly coughs, so Tina makes a break for it as the workers become alert. They chase the pair into Sara's personal office, where they barricade themselves inside.

The two women watch as utter pandemonium unfolds outside the office, and soon realize that the pair of them are also infected. Sara calls home and tells her family she loves them, and then wants to call 911, but Tina suggests burning the warehouse to the ground instead, killing whatever virus has infected them before it spreads, not considering that the warehouse is a transport center that had been active all night. However, they lose the motivation to burn the place down regardless, and Sara has a sudden desire to live, so she bolts for the exit with the code from Daniel.

While the bogus code does not work, Sara can barely make out the original code from the scribbles, and opens the door to the outside world, to safety — but, at the last moment, she closes it, re-engaging the lock. Just as the infected workers close in on Sara, Tina, back in the office, lights a flame, igniting the noxious gas pervading the air and setting the entire warehouse ablaze. In the aftermath, while everyone died in the inferno, a boy receives the package that Doyle snotted in earlier, becoming infected himself.

Rush 2 Send also announces that its other workers will be working overtime to compensate for the warehouse's loss. 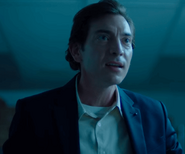