Manifest Destiny is the final episode of the second season of Two Sentence Horror Stories, which aired on February 16, 2021.

I could smell their fear.
They know it’s our time now.

A group of white people are in the midst of a re-enactment of an interaction between the colonial town of Cain's End and the local Blackfeet tribe. Modern natives are conspicuously absent in this re-enactment, with even the native characters being played by white re-enactors with obvious wigs. The only native present is Walks Upon Earth, who goes by Jeremy and laughs at the absurdity of the proceedings, being the sound technician. After everyone glares at Walks Upon Earth, the sheriff currently attempting to stop a native from marrying his daughter conspicuously changes his mind, allowing the marriage to the applause of all the re-enactors present.

It’s all Algonquian though, right?— Rosalie

Walks Upon Earth's girlfriend, Rosalie, then begins interviewing Claire, the actress playing the sheriff's daughter set to marry the native. Claire explains that the marriage healed the rift between Cain's End and the natives. Claire is proud of their re-enactment activities, saying it presents a "positive American history", and "we need that". Walks Upon Earth himself dislikes these proceedings, telling Rosalie that it should be a native narrative, a native story, which excites Rosalie because she wants to hear his "perspective". Walks Upon Earth is hesitant to do so, saying that the re-enacted natives were Blackfeet, while he himself is Cree. Rosalie doesn't find the difference to be significant, requiring Walks Upon Earth to painstakingly explain that it's closer to the differences between the Nordic countries — they're all Scandinavian, but quite discrete and different.

Now out at the grave site of Sheriff Stone, Walks Upon Earth once again stands in the background, handling the audio while Claire talks. Chad, the re-enactor of the native set to marry Claire, then comes over in full native garb and filled to the brim with excitement at meeting an actual native, Jeremy. He asks for advice on how to perform his role better, and they even ask about Walks Upon Earth's tattoo, which is in fact a signifier of his spirit name "Walks Upon Earth" that he won't tell to even his girlfriend Rosalie, all referring to him as Jeremy. Moving on, Chad notes that he doesn't even have any lines because of stoicism, a Hellenistic philosophy that the re-enactors misattributed to Blackfeet, confidently saying they "pay attention to detail".

Chad then gets overexcited and tries to put a hat on Walks Upon Earth, responding seriously to his joke about "Ti-Cree", beginning a brief tussle that ends up knocking Claire and Walks Upon Earth to the ground, with the latter cutting himself on the grave of Sheriff Stone as he falls. As this happens, all of Cain's End comes to a screeching halt, each of the re-enactors standing frozen in place. As this happens, the voice of Sheriff Stone speaks to the man re-enacting him, zeroing in on the town preacher as a traitor.

Walks Upon Earth, Rosalie, Claire, and Chad all return to the jailhouse to collect some medical supplies, a brace for Claire's twisted ankle and bandages for Walks Upon Earth's cut. En route, they run across Evie, a re-enactor wearing an original white dress from the time period. She's terrified by the group and runs away, only to slam straight into an invisible barrier. Thrown flat on her back, she gets up and scurries off in another direction, away from the group. None of the other re-enactors are anywhere to be found, so everyone just continues into the jailhouse.

After everyone's patched up, Claire and Chad suggest that Rosalie and Walks Upon Earth continue the re-enactment in their stead, which Walks Upon Earth detests but Rosalie is enthused by. She even pulls out the original native garb and sets it onto Walks Upon Earth's chest, which immediately induces some kind of seizure, locking him in place like the other re-enactors. The others are unsure why he's simply standing there, but Walks Upon Earth himself is immediately immersed into the past, with the voice of the Sheriff sighing into his head, calling him "nothing but a savage".

Concerned, they take the garb off of Walks Upon Earth, and he gasps back into self-possession once again. He's agitated and terrified, wanting to get himself and Claire out of Cain's End and to a hospital, so Rosalie and Chad go to collect their phones from the church. While they do so, Walks Upon Earth demands to know what really happened in Cain's End. Reluctantly, Claire reveals that they rewrote history to make it into a wedding, "something we can be proud of", but in actuality it was a massacre. Her character, ostensibly wanting to marry a native, was actually set to marry a townsman and had relations out of wedlock. Hoping to divert blame, she falsely accused a native of rape.

At length, Claire reveals that the preacher tried to preempt the slaughter, but Sheriff Stone was enraged at the rape of his daughter. He organized a lynch mob, rounded up every native and dissenter he could find (including the preacher), and executed them. As if to punctuate the point, Chad and Rosalie arrive at the church to find not only their destroyed phones — but the hung corpse of the re-enactor of the preacher. Panicking, they try to escape the church, only to run directly into the re-enactor of Sheriff Stone. They turn tail and run.

The Sheriff himself telepathically directs all re-enactors playing non-native characters to hunt them down and kill them, along with the re-enactors playing native characters. The Sheriff also enters the fray personally, but finds his gun is a nonfunctional replica. Angry, he grabs an ax instead, and joins in the slaughter. Meanwhile, Chad, Rosalie, Claire, and Walks Upon Earth are hiding in a shed, attempting to flee the slaughter of history repeating itself all around them. Chad suggests that Walks Upon Earth take up a tomahawk, the only weapon available to defend themselves, but the moment he does he is once again immersed in the past. Insane, he attacks Rosalie, but she dodges and they all flee. However, rather than pursue them, he instead faces off against Sheriff Stone himself.

Although Sheriff Stone initially has the upper hand, Walks Upon Earth manages to incapacitate him. He nearly finishes him off, with the Sheriff's words "nothing but a savage" singing through his mind, but when he sees his spirit name tattoo he manages to resist. Screaming "My name is Walks Upon Earth!" in his native tongue, he rejects the compulsion and tosses aside the tomahawk, leaving the Sheriff dazed on the ground as he reunites with Rosalie.

While Rosalie did not know that the artifacts were enchanted, she did know what really happened at Cain's End, and believed that Walks Upon Earth and "this place" would make an "incredible story" for her podcast. Rosalie justifies herself, saying "I'm a journalist" and that journalists dig into the dark parts of history. She was angry with Walks Upon Earth for not being a part of her narrative, for refusing to be more than "just an Indian". At this, Walks Upon Earth takes up the wedding veil of the very woman who started the massacre, and puts it onto Rosalie's head. 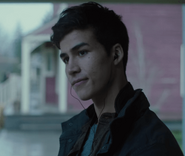 In honor of Sheriff Stone 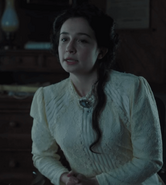 Trapped inside the barrier
Community content is available under CC-BY-SA unless otherwise noted.
Advertisement