Ibeji is the ninth episode of the second season of Two Sentence Horror Stories, which aired on February 16, 2021.

I swore I woke up.
But the monster is still here, grinning on top of me.

Eneh returns home one night to find her door standing open. Suspecting an intruder, she goes inside, only to find her twin Adaora there, panicking both women. After looking at Adaora's shrine, they decide to read their Night Time Tales book about two twin boys who could read each others' thoughts — until one died, and the survivor continued to hear voices inside his head. At this point Adaora gets a headache and retires.

Eneh falls asleep working on her nursing degree, and wakes up to hear a squelching sound from inside Adaora's room, where she is ripping her face apart in front of a fireplace. This causes Eneh to wake up for real, having dreamed it, so she goes into Adaora's room and finds her having a seizure. She quickly brings her to the hospital, but triage places her and her sister lower in the queue, and eventually Adaora has another seizure, placing her in a Permanent Vegetative State after a stroke of her basilar artery.

The doctor recommends the Serenity Valley nursing home to keep Adaora alive. Eneh gets Adaora situated in her room and then returns home. That night, strange winds are active, and the room's door slams shut. Adaora, despite being in a vegetative state, then sees a strange demon clawing at her roommate's bed, that of a doddering old woman. She screams out for Eneh in mind.

Don’t want to be alone when the shadow comes.— Old woman

The next day Eneh leaves more flowers, and notices the old woman, with festering food nearby. Naturally, Eneh complains about the poor service and the fact that the old woman had not been moved, developing sores. Eneh and the nurse both blame the white director for this, but Eneh still decides to leave her sister in a hospice with such poor service regardless. The nurse recommends she talk to her sister's vegetative body in case anything happens, in case she improves.

Eneh asks Adaora to move whenever she wants Eneh to stop at any particular story in her book, and to her shock Adaora actually does manage to move her finger slightly, so she reads the story she selected. The demon returns the next night, caressing the old woman but not seeming to harm her beyond terrorization. Again, Adaora watches this, and as the demon screams out into the night, Eneh herself wakes up — or seems to. In another dream, she sees Adaora, painted and in strange garb, at the foot of her bed.

After he’s done with me, he’s coming for you next.— Old woman

The next day Eneh visits Adaora, the old woman has even more ominous words. Perturbed, Eneh begs Adaora to move her feet, if she can, and although Adaora can hear Eneh and struggles mightily to do so, she cannot. Disappointed, Eneh goes back home, and this night the demon comes for the kill. Sitting atop the old woman, it seems to rip her very soul out, killing her, before making its way toward Adaora. At this point Eneh wakes up again, with the painted Adaora forcibly controlling her movements, making her open her story book to the exact page where the brother begged his twin for access to his mind.

Eneh realizes that it's her sister calling out to her, and lets her in, seeing the demon through Adaora's eyes and Adaora's call for help. She rushes to the hospice, taking beads from Adaora's shrine with her. She arrives to see the demon killing Adaora, but cannot open the door. Remembering how Adaora controlled her body, Eneh enters a trance and drops like a stone, her own body going flaccid as she takes control of Adaora's body. Adaora then cuts the demon and sends it away, dragging herself out of bed to open the door and call for help for her sister.

In the aftermath, Eneh has taken over as director of the hospice, now walking with a cane. Adaora herself is lucid now however, and they are both in complete control of their telepathic powers now, able to talk to each other with ease. That night, Eneh tends to another shrine in the room where Adaora once stayed, only to see the same demon approach the window. Eneh stares it down, and it departs. 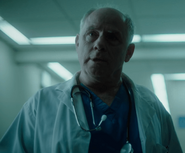 Adaora in a vegetative state

Adaora communicating with Eneh in her dreams