For the character, see Elliot (character).

Elliot is the second episode of the second season of Two Sentence Horror Stories, which aired on January 12, 2021.

I don’t have many friends.
That’s why I keep their bodies in the basement.

Either you got the equipment or you don’t.— Principal Myers insists Elliot use the urinal

Elliot, a trans boy, is beset by discrimination at school, being made to play with the girls in gym (who detest his presence). A music teacher accidentally refers to Elliot by his deadname, calling him "Elsa", and when Elliot goes to the bathroom the principal himself blocks access to the stalls, prompting him to leave in shame. Eventually making it into the school's basement, Elliot finds a bathroom there, but loiters about afterward, not yet wanting to return.

The basement, clearly a dilapidated work zone with occasional sparks even, begins to take on an eerie atmosphere, with a faint scream heard in the distance, which soon blasts out at full volume. As Elliot stares, a strange woman with glowing blue eyes rises up right behind him, but on turning, it only turns out to be a simple janitor who becomes startled by Elliot. She's quite amicable with him, looking at the band instrument and Elliot's songbook, becoming impressed by it.

The next time somebody messes with you, when you’re feeling all that pain inside, just play them a little song.— The janitor to Elliot

Although there's a tense moment where the janitor is hesitant to return the songbook, she takes the opportunity to side with Elliot, deriding the "nasty little people with nasty little hearts" in the upper levels of the school, making him smile. She then offers Elliot some pistachios and they sit together, eating. She prompts Elliot to talk about being bullied, and then offers him an ancient Ocarina to borrow for a day — in exchange for a page from Elliot's songbook. The Ocarina is a magical instrument, and when someone pours their pain into it, "they feel it".

The next time Elliot is accosted, while using the girl's bathroom, Elliot plays the instrument and a ringing blast surges outward, torturing the girls nearby. After the blast subsides, the girls are terrified and promise never to bother Elliot again, quickly fleeing. Immensely pleased by the Ocarina, Elliot returns to the janitor and tells her about the incident. The janitor offers to give away the Ocarina forever in exchange for Elliot's full songbook, but he is hesitant to part with it, wondering why the janitor values it so highly. She responds that he poured immense time and soul into the book, that its value derives from the value ascribed to it, but still Elliot will not part with it. The janitor goes to leave, citing other work to be done, but Elliot has a change of heart at the last moment, and relinquishes the songbook in exchange for the Ocarina, saying "I can always write new songs".

Meanwhile, Tony, the big brother of one of the girls who tormented Elliot in the bathroom, learns of his little sister's abuse and goes on the hunt for Elliot. Tony finds him just after the exchange with the janitor, demanding answers, retribution. Although Elliot protests innocence, saying the girls attacked him first, Tony won't hear a word of it and knocks the Ocarina from Elliot's hands. The Ocarina, however, returns to its master, flying up the stairs and slamming into Elliot's hand, who blows it.

The effects of the Ocarina are far more detrimental now, causing a compound fracture in Tony's wrist and slamming him back against the wall, sending him into shock. Elliot goes to class, but is unsettled by what happened and soon goes to leave. Principal Myers demands answers after reports that Elliot was seen running away from the scene, calling him "rotten fruit" and proclaiming that he wouldn't let him tarnish the other students. The Ocarina returns to Elliot, who picks it up and blows it once again, causing the Principal to reel back in pain and allowing Elliot to flee downstairs to the janitor.

There, Elliot discovers two of the missing kids inside lockers, and a third, empty locker, which the janitor proclaims is for him. The janitor goes on to explain that the important thing is the essence of pain that will live on in the Ocarina forever, but Elliot protests that "I am more than just my pain". He tries to toss the Ocarina aside, but, faithful as ever, the Ocarina returns to Elliot's hand. The janitor backs into the darkness, saying to "hurt or get hurt", as Principal Myers closes in.

Myers declares Elliot to be a danger and attacks, swinging a corroded pipe wildly as he advances towards Elliot. Despite his desire to be done with the Ocarina, Elliot plays the Ocarina a third time out of self defense, dropping Principal Myers to the ground. The janitor commends this, noting that she herself cannot be hurt, but Elliot doesn't try to hit her with Myers' pipe — he instead smacks the Ocarina with it. Panicking, the witch offers to return the songbook, threatening to destroy Elliot's musical talents if the Ocarina is destroyed, but he does not believe the witch and smashes the Ocarina into pieces. The witch vanishes with it.

The other two children are then freed from the lockers, and become Elliot's friends. Some time later, they meet up on a staircase, noting that their school is getting a new Principal, and exchange friendship rings shaped like birds with each other, commemorating their bond with a group photo. Elliot grows into an old man, and never forgets what happened to him, writing down these experiences in a book. Likewise, the witch never forgets about him either. 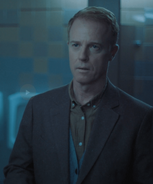 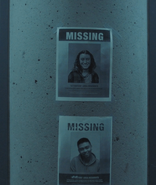 Second corpse in a locker
Community content is available under CC-BY-SA unless otherwise noted.
Advertisement