Bag Man is the first episode of the second season of Two Sentence Horror Stories, which aired on January 12, 2021.

Be cool, stay in school.
It’s easier for me to get you.

A group of teenagers, Winton, Gabbi, Zee, Sam, and Jax are in detention under blanket suspicion of a cherry bomb explosion. The resulting panic prompted school officials to engage a newly installed security system, which sent out text messages to all parents and caused a scandal, leaving Principal Gallo in hot water. He begs the guilty party to come forward so that he may dismiss them all, but everyone stays silent, so he leaves them in detention, taking their phones as well.

Jax, bored, tries to flirt with Gabbi, but this draws the ire of Gabbi and soon Winton as well, nearly coming to conflict until Gabbi diffuses the situation. Things devolve into mean-spirited banter between Gabbi and Jax, but while this happens Winton notices a bag moving behind him. Presuming it to be a phone, he looks inside, only to find a bleached head.

Winton panics, but everyone thinks it's a bad attempt at a prank. At length, Zee goes over to the bag and opens it, screaming — facetiously, as there is no head inside the bag, which she demonstrates. After some frustration with Winton, Gabbi throws the bag outside and everyone hunkers down for the monotony of detention. Jax, becoming bored, gets up and covers up the camera for a laugh, prompting Gabbi and others to bring up his race. Detesting such treatment, Jax leaves to go to the bathroom, and Zee defends him in his absence, only for everyone who brought up race to reduce her motivations to supposed romantic feelings for Jax.

Trying to justify her own agency, Zee claims they're only barely friends — which Jax overhears. He goes to the bathroom and takes the bag with him, planning to use a water balloon to prank the others in detention, but a chalk-white man emerges from the bag behind him and kills him, disposing of his body in the bag. Principal Gallo naturally cannot find Jax, although he did find the bag conspicuously back in the hallway, so he leaves it in the room with the other teenagers, locking them inside to prevent further incidents. He then departs to contact Jax's parents.

The bag moves once again, prompting Zee to check it once more — this time screaming for real, when she finds Jax's severed head inside. Everyone else devolves into hysterical arguments while Sam deludes himself into saying it's a joke, that it isn't real. He turns around and screams this at his compatriots, only for the Bag Man to rise up behind him and snatch him away, killing him under the desk. Terrified, everyone else barricades themselves in the closet.

Under seige, Zee admits that she and Jax were at fault for the cherry bomb. Threatened with expulsion, she started lying unconvincingly, drawing down suspicion on everyone in detention and unknowingly condemning them to be killed by the Bag Man. The Bag Man himself is stoically guarding the bag, which gives the teenagers an idea to use the bag to distract him so that they can escape, with Zee acting as bait. Before she agrees to this however, she admits she had feelings for Winton and didn't understand why he ghosted her, only for Gabbi to mention that she made Winton do it, because Gabbi had feelings for Zee.

Touching moment over, Zee sallies forth to distract the Bag Man, but suddenly cannot find him. She starts banging a pan to draw him out, only to turn around and find him behind her. As the Bag Man draws closer, Gabbi grabs the bag and throws it to Winton, who threatens to cut it with scissors. This draws the Bag Man away from Zee, and Winton tosses it in the closet, locking the Bag Man inside. Zee and Gabbi throw the fire alarm and remove the sticker blocking the camera, allowing Gallo to see what's happening, including Jax's severed head. He panics and throws the emergency lockdown once again, sealing all doors and calling the police — but the Bag Man has already burst out of the closet, and the students are trapped inside. 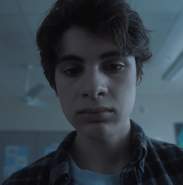 Bag Man comes for the teens during lockdown
Community content is available under CC-BY-SA unless otherwise noted.
Advertisement